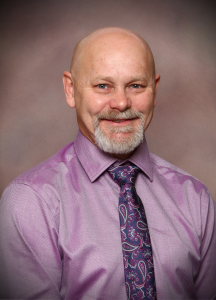 Bringing You One Step Closer To Home

Edmonton is Alberta's capital city, located in the centre of the Alberta Capital Region on the North Saskatchewan River. With a metro population of over 1.1 million, Edmonton is the second largest city in Alberta and the sixth largest metropolitan area in Canada. The city of Edmonton covers an area of over 680 square kilometres (264 square miles) while the Edmonton Capital Region includes a metro area of over 9,400 square kilometres (3,636 square miles).

35 municipalities make up the Edmonton Capital Region, including the cities of Edmonton, St. Albert, Spruce Grove, Leduc and Fort Saskatchewan; the surrounding counties of Strathcona County (including Sherwood Park), Leduc County, Parkland County and Sturgeon County; and the towns of Beaumont, Bon Accord, Bruderheim, Calmar, Devon, Gibbons, Legal, Morinville, Redwater and Stony Plain. The Greater Edmonton Area also includes a number of smaller villages and reserves, including Wabamun, Seba Beach and Kapasiwin among many others.

The city of Edmonton is the governmental, cultural and educational heart of the Alberta Capital Region, the northern anchor of the Calgary-Edmonton corridor, and home to most of the region's residents. 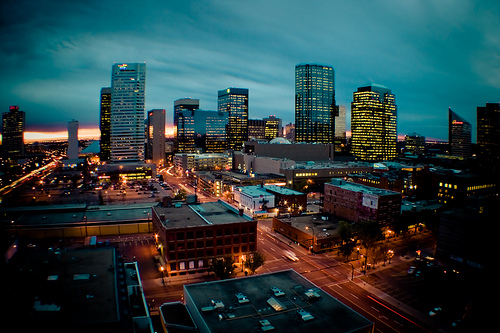 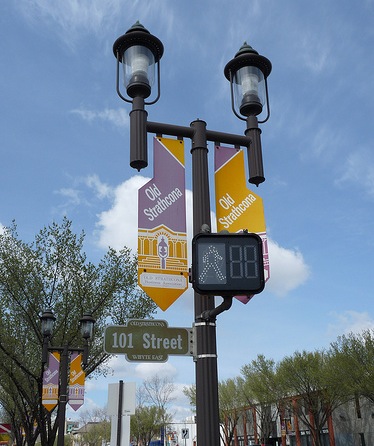 At the core of the city is Edmonton's Downtown, consisting of the city's Commercial Core, the Arts District, Rice Howard Way, Jasper-West, McKay Avenue, the Warehouse District, and the Government Grandin area. The Arts District is the cultural heart of the city, including most of Edmonton's primary cultural building including the Citadel Theatre, City Hall and The Art Gallery of Alberta. The Government Grandin area is home to many city and provincial government buildings including the Alberta Legislature, while the Warehouse District contains older brick warehouse leftover from when this area was the city's prime industrial core: many of these heritage buildings are being restored, renovated and converted into trendy loft and condominium spaces.

Surrounding Edmonton's Downtown are older urban neighbourhoods including Oliver, Westmount, Glenora, Boyle Street, McCauly, Bonnie Doon, Cloverdale, Parkdale and Riverdale. Each of these communities has its own unique personality, from Oliver's high-density high-rise apartments and condominiums to the Scottish mansions of Glenora and the older, character homes in Westmount and Riverdale.

Across the river from Downtown Edmonton is Strathcona, considered by many to be the trendiest and most vibrant area of the city. Home to the popular and bustling Whyte Avenue which offers some of the city's best nightlife, Strathcona is a major cultural hotspot, hosting festivals throughout the year and set apart by its many locally owned and operated restaurant, cafes, businesses and boutiques. Nearby is the French-Canadian inspired neighbourhood of Garneau and the main campus of the University of Alberta.

Beyond this urban core can be found the more mature suburban areas of Edmonton, including Rundle Heights, Sherbrooke, Allendale and Empire Park among dozens of others. These higher density suburbs offer a variety of housing choices including single family homes, townhouse complexes and walk-up apartment and condominiums.

Radiating out from these communities are the newer suburbs, areas like Millwoods, Clareview, Callingwood, Terwillegar and Castle Downs. Edmonton continues to expand its borders, offering newer communities beyond the Anthony Henday ring road including Summerside, Windermere, The Hamptons, Ellerslie and Rutherford. Many of these outermost suburban communities include small recreational lakes.

Is this your first time in Edmonton and the Capital Region? Check out these sites before you visit us!

Edmonton has a wide variety of shopping options, from large malls to local shops and boutiques along Whyte Avenue.

Not for nothing is Edmonton known as the City of Champions! We're big sports fans, and here are the teams we cheer for.

The city of Edmonton has two public school boards and a wide range of post secondary options for older students. 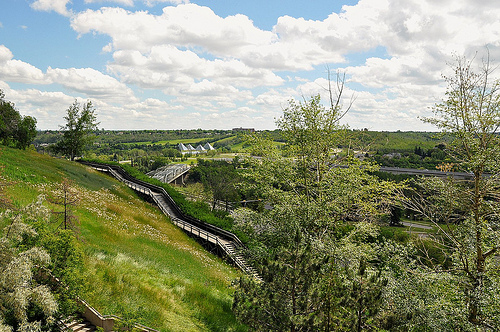 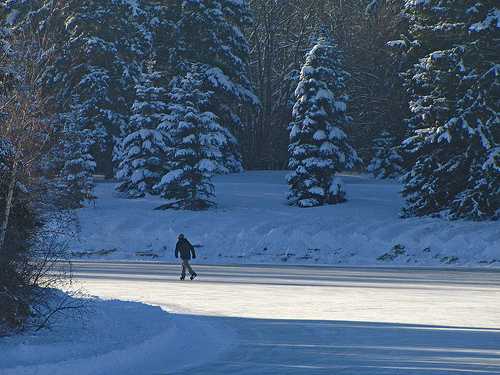 Built on the river, Edmonton is divided by the North Saskatchewan River Valley, the longest stretch of connected urban parkland in North America and the highest per capital parkland area of any Canadian city. 22 times larger than New York City's Central Park, the North Saskatchewan River Valley runs from the south west corner of Edmonton and winds its way through the city, slicing through Edmonton's bustling downtown on its way to the north east quadrant.

This unique urban "Ribbon of Green" parkland is interconnected with multi-use bike and walking trails, and is home to many popular Edmonton attractions including Fort Edmonton Park and the Edmonton Valley Zoo. Several popular private and public golf courses dot the River Valley, including the Mayfair Golf and Country Club, Riverside Golf Club and the Rundle Park Golf Course.

The 25 kilometre (16 mile) River Valley system includes 11 lakes, 14 ravines and 22 major parks, yet this massive river valley system only makes up half of Edmonton's total 27,000 acres of parkland. The rest is scattered throughout city neighbourhoods in both small and large portions, including dozens of community parks and an extensive ravine system in the south west area of the city.

Edmontonians make use of this extensive parkland all year round, enjoying both summer and winter activities. In the winter public greenspaces and golf courses become popular places for cross-country skiers while many of the lakes open for public skating once they freeze over. Edmonton has two downhill ski hills within the city limits and an additional two within the greater Edmonton area.

These are some of Edmonton's most well known attractions, including iconic government buildings, notable parks, popular public gathering areas and recreational spots.

There's lots of things to see and do in Edmonton: learn more about some of our fantastic recreational facilities.

Edmonton has a ton of fantastic parks and river valley areas. Learn more about our park and trail system. 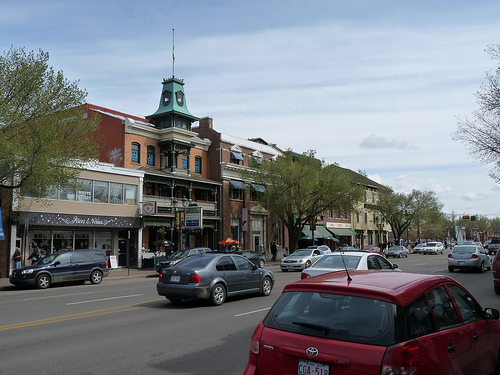 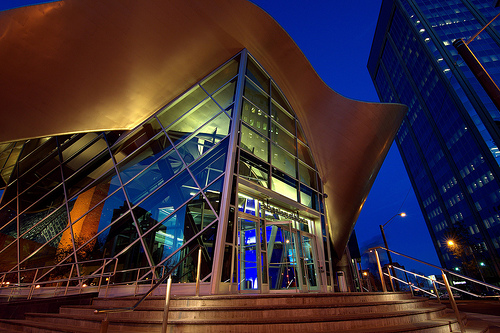 Edmonton's Downtown core and Whyte Avenue areas are where most of the events and key cultural buildings are located. The city's Arts District includes City Hall, Sir Winston Churchill Square, the Art Gallery of Alberta, the Citadel Theatre and the Winspear Centre. Across the river, the Whyte Ave, Glenora and University areas include many theatres and live music venues. Old Strathcona is home to a mix of live venues and local theatre companies including The TransAlta Arts Barns, The Waterdale Playhouse, Catalyst Theatre, and the Varscona Theatre.

Known as "Festival City, Edmonton is host to an impressive roster of year-round world-class festivals including the largest Fringe Festival in North America, a week-long festival featuring over 1,400 performances in 40+ indoor and outdoor venues. Other major festivals include the Street Performers' Festival and Taste of Edmonton in Sir Winston Churchill Square, Capital EX at Northlands, and the popular Folk Music Festival in Gallagher Park.

The most popular nightlife spot in Edmonton is Whyte Avenue, with most restaurants, cafes and clubs located between 99th and 109th street in a trendy atmosphere mixing a vibrant streetscape, unique locally owned specialty shops, and the highest concentration of heritage buildings in the city.

Since the 1990s, Edmonton's Downtown has undergone a vast change and now provides a diverse array of trendy restaurants, pubs and shops. With this resurgence of interest and activity in downtown Edmonton, more and more independent boutiques, live venues and chef-driven restaurants are opening.

From theatre and opera to live local music and classic symphonies, Edmonton has some truly fantastic live venues and world-recognized theatre companies.

Edmonton values its rich, diverse heritage and culture, and takes pride in is preservation and presentation.

Keep up to date on what's happening in Edmonton on a day to day basis with local TV, radio and newspapers.

Not for nothing is Edmonton known as "Festival City". From long multi-week festivals to smaller weekend-long extravaganzas, Edmonton has a festival for every season.

Morinville is an active community, providing all the recreational opportunities that one typically finds in larger populations.  Enjoy our beautiful parks, excellent sports facilities, paved walking trails, or spend the day fishing at our annually stocked Fish and Game Pond.  Among many other activities Morinville offers skating, hockey, curling, tennis, baseball and soccer just to name a few.

Take some time to view the numerous historic homes scattered throughout downtown, experience the stained glass in the St. Jean Baptiste church or visit the Musée Morinville Museum.  Go shopping in the quaint shops or check out the great food at local restaurants. There is always something to do.

This is a family environment where children play, attend excellent schools with bilingual opportunities and enjoy year round festivals and events. With close to 70 service clubs, groups and organizations, volunteer involvement is abundant!

Come share our history as we celebrate 100 years!  Join us in our yearlong celebration, with exciting seasonal activities.  The Snowman, St. Jean Baptiste and Christmas Festivals are hosted by the community every year and several new events will be added as we commemorate our 100th Anniversary.

Community Cultural Centre – It’s Ours!
The pride of our community is an amazing conference and cultural facility offering first class, fully-equipped conference, meeting & banquet space.  Poised to become a hub of activity in the region, this exceptional venue also hosts theatre, music and dance performances, visual arts exhibits, and family programming and community celebrations.
Whether you’re new to our community, been here for years, or planning a visit, we invite you to come celebrate with us!  Visit www.morinville100.ca for detils about all of the community events.

The data included on this website is deemed to be reliable, but is not guaranteed to be accurate by the REALTORS® Association of Edmonton. The trademarks REALTOR®, REALTORS® and the REALTOR® logo are controlled by The Canadian Real Estate Association (CREA) and identify real estate professionals who are members of CREA. Used under license.